Regarding material handling in the industry, thoughts quickly turn to logistical equipment and the associated optimization issues. But hasn’t the proverbial baby already fallen into the well when aspects of logistical solutions come into focus?

After all, logistical requirements are preceded by their causes. Those who know them and work on them consistently will also learn how to mitigate their consequences and avoid material handling costs at an early stage. We would like to show you where you can find levers for transportation costs and logistics that have primarily nothing to do with forklifts, AGVs, carts, conveyor systems, and other material handling equipment.

Avoiding costs instead of reducing costs

Sounds good, doesn’t it? Of course, this strategy is considered the primary solution. Already product developers in the industry try to reduce the number of parts. Methods such as PROKON™ or DFMA® do indeed focus on assembly efforts – the same applies, of course, to the costs of material handling.

The second lever lies in process design. In lean production, transportation is generally considered a waste. In terms of material handling costs, this means that if someone is already holding material in their hand, then this should also contribute to an increase in product value. If the part ends up in a buffer, warehouse, container, or transport cart instead of at the joining or usage point, the material handling in question was nothing more than waste.

Product development and value stream design are the main causes of material handling. But to be honest, these levers reach their limits quite quickly. What remains is to reduce the necessary transport effort to a minimum. Here, all effort components of transport have to be considered:

Then the cycle starts again from the beginning. It should be noted that this cycle is always the same, both on a small scale and in larger geometric dimensions. In MTM, it describes the movement of, for example, an individual part (as the transport material) from its storage location (the source) with the help of the hand-arm system (as the means of transport) during joining to an assembly (as the sink).

Where are the handling costs hiding?

If we look at the components that offer the highest costs in terms of time delay, picking up and placing the material turn out to be the ones that often provide the greatest design potential.

For example, it is comparatively time-consuming to remove a small M4 screw from a container containing many such screws. This requires countless finger movements to grab exactly one screw from the crowd. Much of this effort can be eliminated if the part is provided singly by sortation. Thus, only the fingers have to be closed to grasp the small screw. Such a solution provides a design potential of around 30%.

The effects on efficiency are even more drastic during joining. Here, too, countless auxiliary movements are necessary to ensure that the transport material reaches the position in its sink undamaged and safely. As an extreme, imagine the exact fitting of the transport goods into a narrow shelf compared to simply dropping them out of the transport movement. Even at the sink, design potentials of 50% are not uncommon.

In contrast to this are the actual transportation movements. Here, the speed and capacity of the means of transport offer design potential and, of course, the distance and the obstacles (e.g. lifts, ramps) to be covered. While speed usually quickly reaches its limits from a physical and safety point of view, the design of capacity and distance is a clear lever for reducing transport costs. Our video illustrates this.

A systematic and holistic approach to material handling

Let’s take a simple example: 10,000 medium-sized in-house production goods have to be assembled per year, resulting in 2,000 large assemblies. The level of abstraction of this example alone illustrates the dimension of the solution space. So the question here is not how the 10,000 parts get from manufacturing to assembly, but it starts with whether there even needs to be such a transport relationship between two production areas.

It is helpful to first clarify the Value stream:

These are all process design issues that need to be addressed in a value stream assessment regarding overall productivity and material flow.

What is a production cell?

With the help of the rhythm in the value stream (customer cycle), it must be determined how often quantities are required. From this follows the dimensioning of the space required at the sink, i.e. how much space must be available for holding the necessary quantities at the sink so that there is no break in the material flow. The tendency is therefore to require one-piece flow at the sink, i.e. each material should be delivered individually at the exact time of consumption. This avoids handling and reduces buffer space at the point of consumption.

However, most things cannot be supplied in this way. The results are transport lots and ultimately container sizes. These usually follow a container concept. Not every sink requirement can be implemented, only a limited number of container types are available. This reduces the complexity of logistics and warehouse equipment. On the other hand, the containers have to be handled. The space requirement increases, e.g. in the form of shelves at the workplaces.

At this point, at the latest, it becomes clear that an integrative treatment of the value stream and the production layout seems to be the most efficient. This is because issues relating to geometric design as well as sequence and quantity considerations come into account. In addition, the distance aspect between source and sink can be designed and illustrated in key figures.

How do factory layouts depend on the value stream?

Placing questions about the material handling costs solely with logistics experts seems too short-sighted. Rather, value stream, layout, and logistics play together. Consequently, these three areas should also be considered in an interdisciplinary manner and designed together. Planning software with this focus can make a significant contribution to success here. Basically, however, the consideration of material handling already begins in product development. After all, anything that is not required does not have to be handled later. 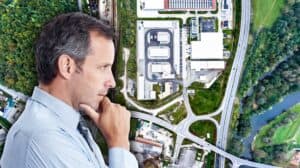 The plant floor plan – just a drawing?
1. August 2022
Content
Like this content? Receive more of it straight to your inbox!
Receive professional knowledge by e-mail
Who is advancing visTABLE®?