How are social spaces incorporated into layout planning?

This article is about some practical tips for planning social spaces. What German guidelines are there and how can they be practically implemented in layout planning?

What is the significance of social spaces in the company?

The term “social” comes from Latin and means “common”, “connected”. It expresses a sense of belonging to a human community, which also exists in every company. When people feel comfortable in a place, they can also work better together. Social spaces therefore make a decisive contribution to the health and satisfaction of employees and promote productivity. Good social spaces are characterized by cleanliness, comfort and functionality. They should practically be a feel-good oasis for every employee at work and function for the purpose intended.

Social spaces – what counts as such anyway?

Social spaces are often referred to as ancillary spaces, and include the following:

Legal basis for the design of social spaces

In order to comply with the legal requirements when planning social spaces in practice, the Technical Rules for Workplaces (ASR) and the Workplace Ordinance (ArbStättV) provide orientation. The ArbStättV primarily creates a rough framework for the significance and furnishing of social spaces. The ASR deals specifically with the design of a room.

How much space do I need per employee?

Employees. In ASR 4.1, the first step, so to speak, for the area dimensioning of sanitary rooms can be found in the following table:

Matching the number of toilets, urinals and washing facilities, ASR A4.1 then also gives specific examples of spatial design, as the following example illustrates. This allows the space requirements to be determined relatively precisely.

For break rooms, again, at least 1.00m² of space must be provided per employee (table and chair) and other equipment such as kitchen units, snack machines, water dispensers, as well as access and traffic routes must be planned as additional space (ASR A4.2, page 561, 4.1 General requirements, item (9), GMBI 2021).

What has to be considered for the accessibility of social spaces?

In principle, the path length to toilet rooms should not be longer than 50 m and must not exceed 100 m (ASR A4.1, page 401, 5.2 Provision, GMBI 2017). This applies not only from the workplace in production, but also starting from break and standby rooms, washrooms and changing rooms. On the one hand, short distances are more pleasant and often less dangerous (crossing internal traffic) and on the other hand, this saves time and increases productivity.

The distance between changing rooms and washrooms should ideally not exceed 10m on the same level.

How can I visualize social spaces in the planning?

The following example shows the 3D visualization of sanitary rooms in a planning software. A scaled layout from the ASR A4.1 and 3D models from the standard library served as a basis.

This micro layout can subsequently be used as a standard module for other planning in the company. This also works for break rooms, taking into account the specifications in ASR A4.2 as can be seen in the following picture.

further articles on the topic: 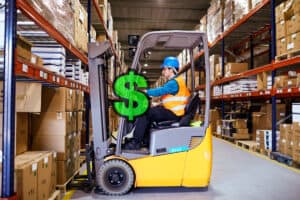